Bed bugs like to live as close as they can to their meal source and the seams and buttons of mattresses and joints of box springs are key harbourage points for both living and egg laying.

If you are unlucky enough to suffer from a bed bug outbreak, it’s likely that you may have to throw out your mattresses and beds. By using the Cimexine Sure-Guard fully encasing mattress protectors and box spring covers, you are removing those harbourage points. So you no longer need to worry about the costs of throwing out the beds.

Our luxury Sure-Guard protectors feature bed bug proof zips and are made from a silky-soft, cool, breathable fabric that is also fully waterproof thanks to a clever laminated inner membrane. So not only do they keep bugs out. They also keep the mattress pristine by not allowing any unwanted spillages or accidents getting through to the mattress, significantly extending mattress life.

Many times we receive calls from people who believe they are being bitten but have not yet found an insect. This is where our CIMEXINE Bed Bug Trap and Monitoring System comes in. Our monitors create a dark harbourage point which bed bugs love, and 360 degree access means they can enter from any angle. 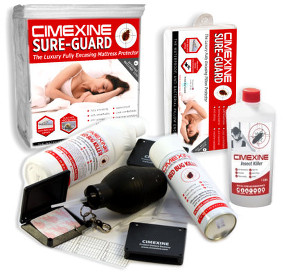 The acclaimed Cimexine ‘Protect, Detect, Destroy’ system for bed bug management is a revolutionary three-step system that allows you to PROTECT both your beds and your customers; DETECT bed bug outbreaks before they become infestations; and DESTROY bug and all their eggs effectively in one treatment, GUARANTEED.

The Glue Pad, which is laced with a bespoke pheromone attractant, is placed into the recess and the insects are unable to detect it until it’s too late.

The attractant boasts a special slow-release matrix, meaning they remain effective for as long as the pad remains sticky.

The ramps are textured to allow the bugs to grip easily and the hinged lid makes it simplicity itself to set the pads and inspect the monitor.

Available in our Shop in several options, they also feature an inner ‘flipper’ which lifts up the pad on lifting the lid, making the process of removing and/or replacing the pad very easy indeed.

The monitors feature a slimline profile meaning they can be placed into narrow gaps – even under a divan bed – and they come in unobtrusive black.

Each monitor purchased comes with two Attractant Glue Pads, plus a bed bug monitor record label which sticks to the underside of the trap for noting down and dating activity found.

The monitors sit in a holder and can be easily slid out and quickly checked as part of the normal housekeeping routine, because they are the only monitor in the world to feature a viewing window. They should be checked once a week. If there are no signs of bed bugs just slide the monitor back into its holder. If there are, you have spotted them early and it’s time to DESTROY!

There are multiple strains of bed bugs and many strains have become highly resistant to the residuals of even the best professional strength insecticides we have. And because this is a nocturnal insect, with insecticide we are relying on the residuals left behind after treatment. Having said that, we know which are the best products out there, and if the infestation is new or recent and low level, insecticide can still work, although it can’t be guaranteed.

If the infestation is well established, if insecticide is proving ineffective or if you want to go for the best bed bug treatment straight away, the answer is heat treatment. With this approach the key areas are super-heated to an optimum temperature for a prolonged period. It is the only approach that kills the bugs in all their stages, including (vitally) the egg stage, so you will not get a new infestation a few weeks later when the eggs hatch. Bed bugs cannot build up resistance to heat treatment. Another major plus with heat treatment for hotels and guest houses is that, unlike with ineffective chemicals which require the room to be closed after treatment, the room can be opened up to guests the same day, meaning that you don’t lose vital revenue. Plus with heat treatment you never have to throw out your beds and furnishing because it penetrates every crack and crevice.

The ultimate bed bug solution, our heat treatments are GUARANTEED to get rid of the problem and unlike many larger pest control companies, we are able to treat small infestations. Note that in a commercial situation we will always insist on treating rooms either side of where the outbreak has been spotted. 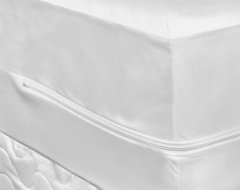 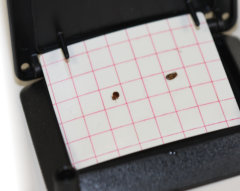 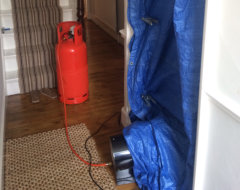 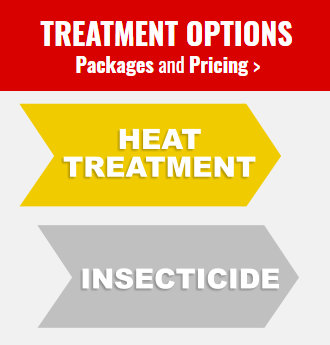